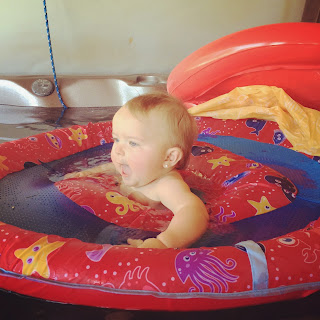 So I had an excellent Mother's Day Weekend.. We went to the farm to visit all the Grandparents out West, and had fun. We let the girls eat Watermelon for the first time, and that was entertaining. Cross was more a fan than LL. Cross just tore into it and smashed it into her face. LL was more delicate about things, and just ate small pieces. That's the way they are about everything.. Cross like a bull in a china closet, busting through things, and LL taking one step at a time..

We also let them swim in their floaters. We had these little things with canopies, and we put the in there.. They didn't swim in the pool, because it was too cold, so we let them float in the hot tub.. they also enjoyed this.. On Saturday we went to see my dad in Sentinel.. The girls love going to visit him because he does ridiculous things to entertain them.. Plus they have all of Joe & Ava's (Nephew & Niece) toys leftover, so they love that.. And we fed them BBQ.. which they also loved.. So win/win..Cross learned to play the drum at dads.. she enjoyed that a great deal..and LL learned that she really loves Grammy J's sweet tea! (uh oh)

On Saturday evening we went out to eat at Prairie Fire.. The girls had Pasta, and loved it. I can't help but laugh at Papa Steve, because Cross likes to sit by him and them offer him her food.. and then also wipe it all over his arms. He takes this pretty well, lol. She's also hilarious because at both my dad's house, and at Prairie Fire she will throw food on the floor and say "Da! Da!" which means DOG! Dad doesn't have dogs, so Cross just looks down and waits for dogs to magically appear.. same at restaurants.. I have to admit, there is some awesome benefits to having dogs.. One being the do act like garbage disposals.. which is helpful. But Cross & LL assume everyone has dogs, so Cross will eat something, throw a piece down, eat something, throw a piece down.. because she is sharing with her dogs.

My Mothers day Present from MJ and the girls was a massage.. so On Sunday when we got back he went to visit his brother and I went and got a massage.. I still have this annoying cough that apparently I'm never going to get rid of.. so that was the only downside of the weekend.. I've been to the Dr. 3 times, and they have told me I have crappy allergies.. Yup. I know that. Thanks.. But I still have a cough. Blargh.. annoying..

In other news, with Mothers Day happening this weekend, I was thinking back to last year when MJ & I were thinking that that would be my last Mothers day before I had the girls.. Now we look back and we are just shocked that the girls are here..and we still have two of them! Their birthday is coming up and we were driving down the road the other day and I said "Can you believe we made it through the first 4 months?" He said.. "NOPE".. lol.. And we really can't. Now the girls are fun and do funny things every day. LL has started making this sour-patch face. Its pretty hilarious. (see below).. If you say something she does not like.. you get this face.. It cracks us up. 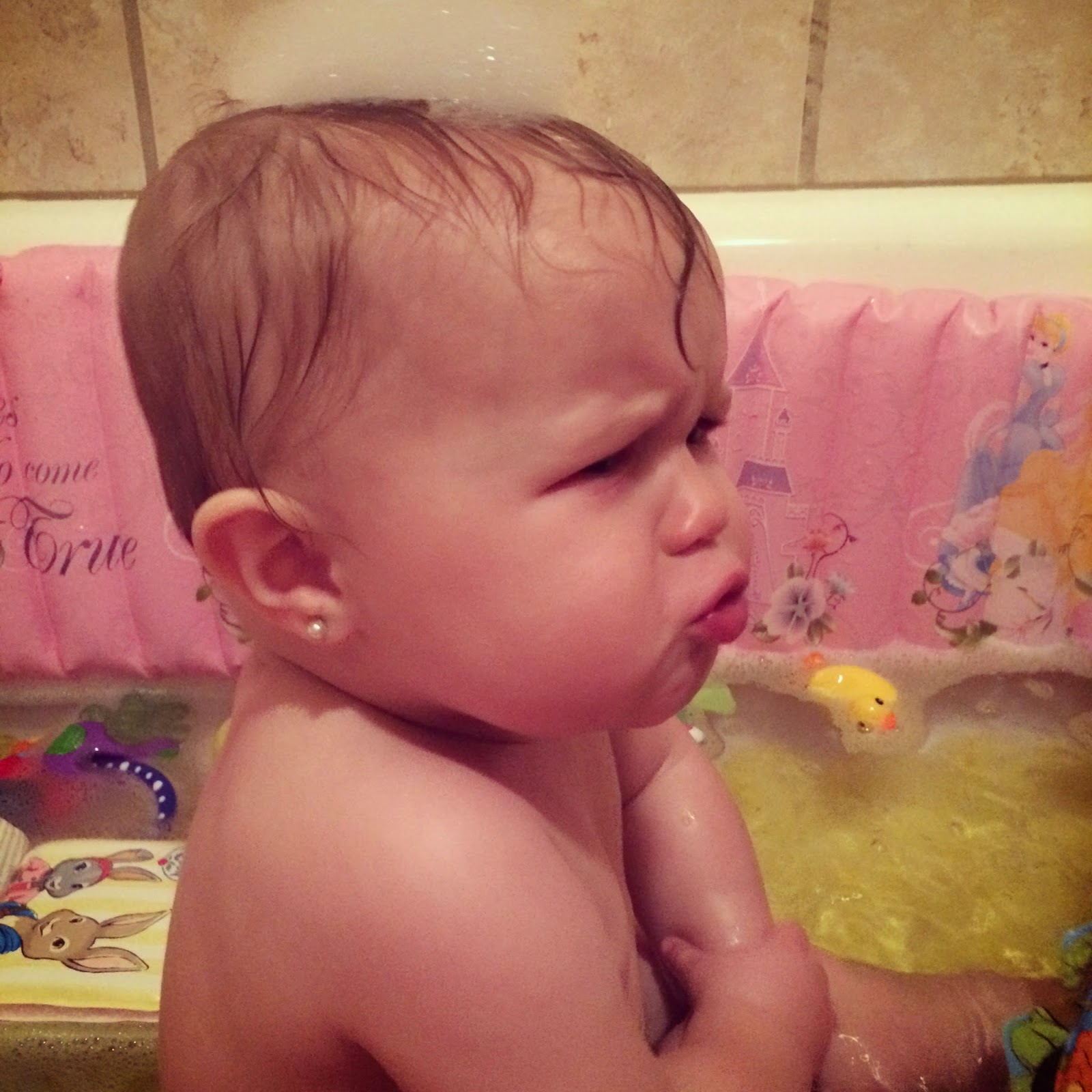 Cross is all over the place.. she's so funny to me, but she's also started to push the boundaries. They have both started swatting at each other, which we are trying to curb.. But Cross will knock over anything that is in her way.. including me.. including tables.. including her sister.. lol.. She's so determined, and so very smart. She catches onto things quick, and she loves to read books. She cracks us up with her joy. She is seriously the happiest girl ever. We have really been blessed in that department.. this weekend Steve said "Are they ever NOT happy?" and we said "yes, when they are tired"..but thats it.. 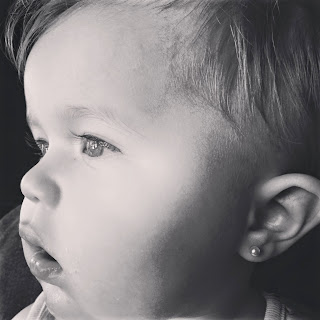 We are also super fortunate to have so many people around us willing to help.. to give us a break, to give us a hand, to give us a pat on the back! We love all our friends and family, and church, and value all those relationships. The girls are now to the age where they remember people and that is really fun to watch too. Last week Chantry came over and Cross was doing this funny thing that she also does with Brandon, where she smiles really big at them.. .then looks away..... big smile and reaches for them... then turns away. She's a little baby flirt & it makes me laugh. They are something I thought I would never have, but now I can't imagine my life without them..

Something kinda sad.. last week I did have to put my 17 year old dog, Rally to sleep.. It was really hard because we had been through so much together. I got him when I was in college, he moved with me to  Corpus, he went to radio events with me.. He was a good, good dog, and he will be missed. But I know he is super excited to see Pandora again on Rainbow Bridge, and I know he is happy to be healthy again!
XXOO
Posted by KC Sheperd at 12:49 PM 2 comments:

Twinsies in the Rye 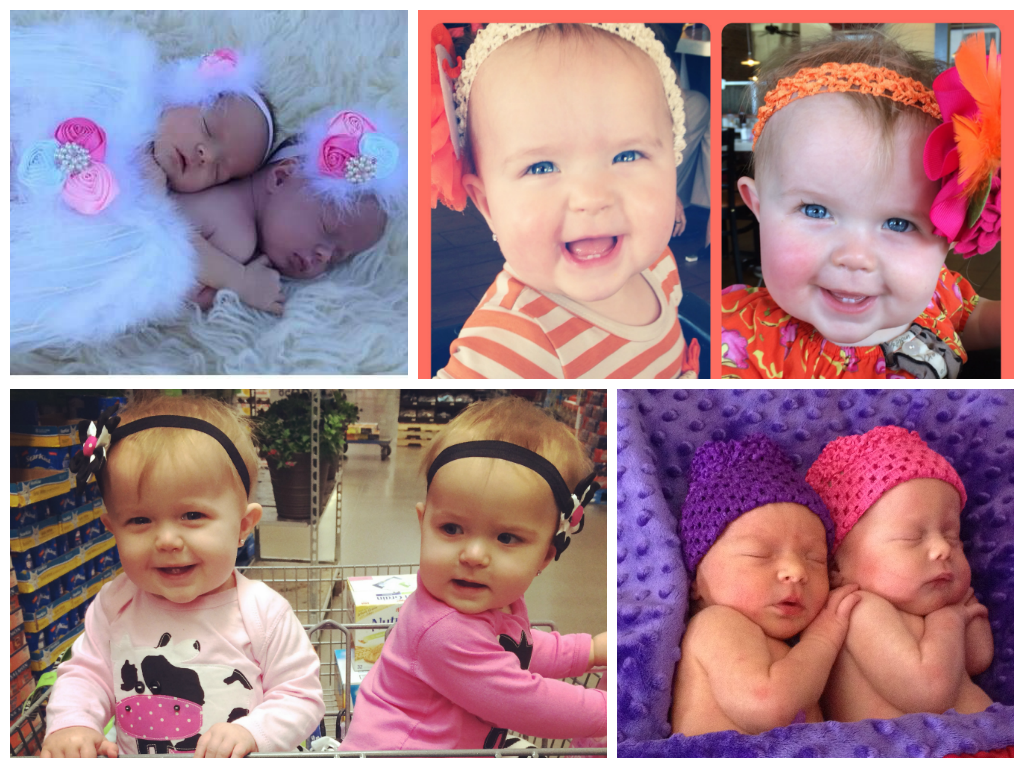 What a difference 11 months makes.. Just look at my little babies in their newborn pics, and then my sassy girls now.. I still cannot believe I had twins! Who does that! lol.. Its still shocking to me every day, but I quickly remember when I go into their rooms in the morning and try to figure out how to easily carry BOTH of them to their high-chairs for breakfast! Everything is harder..

But.. one of the most awesome things is watching their relationship start to blossom.. We went to Canute last weekend and mom has 2 cribs for them in a bedroom.. We pushed their cribs together and they had the BEST time..They would both stand up and look over their crib and giggle and talk to each other. They would spend about 30 minutes/night just giggling and talking to each other before Cross finally gave up and passed out.. but it was so cute to watch.. So thats pretty cool.. because otherwise they would just be in there by themselves.. not mine, they have each other!

Watching their relationship has been funny the past few weeks. Sometimes they are so sweet to each other, and then other times they are pushing each other and poking in the face. LL has started pushing Cross in the face, and it never ends well.. Because then Cross pushes her back, or squeezes her arms, and LL does NOT like that.. Plus Cross is crazy strong.. So we have been telling them to 'be sweet' and working on things like that with them.. I'm thinking this is always going to be an issue.. lol..
So when we got back to OKC, we also pushed their cribs together and found that they still like talking to each other and giggling before they go to bed. Its funny because Cross just cannot stay up as long as LL.. so she eventually just sits down with her Owl, and gradually lays down.. Meanwhile, LL is just chatting up a storm.. lol.. I'm thinking that will be their relationship MOST of their lives. 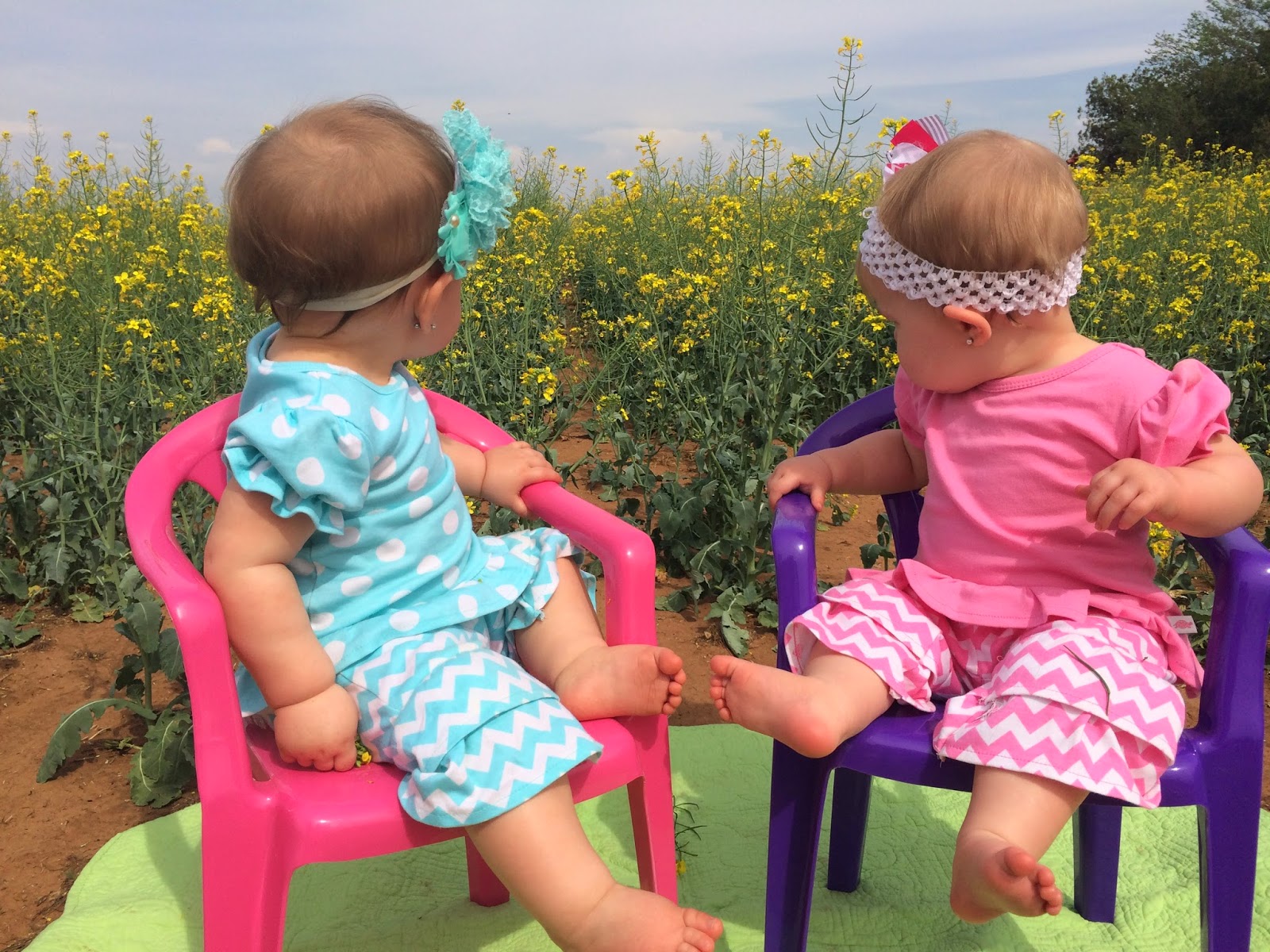 So over the weekend at the farm, Mom gave the girls these little ponies that one of her friends had gotten for them at their baby shower.. They sing a little song and Rock..Both of the girls loved them. Cross liked putting her hands in the horses mouse while he was singing to her, and LL loved riding him.

We Also took the girls to the Canola Field. Last year at this time I was around 35 weeks pregnant and the Canola was beautiful, so MJ and I stopped on our way to church and took a pic of me in the Canola.. So this year, Mom and I put the girls in the canola.. It was hard getting them to pose because Cross just wanted to EAT the Canola.. But we got some cute pics. We also put them in the rye across the road from us, and those turned out really cute. They are really good little posers.

On Sunday we got up and took the girls to see Pops & Grammy J in Sentinel. Dad had been wanting to take them to church for awhile to show them off, so we met them there.. The girls had fun. They went back to the nursery and played with these cool wooden tables. They always act pretty great in the nursery, and I'm glad about that. LL loves playing with the other kids.. and Cross just loves exploring new toys and things.

We had a great weekend. We still have not taken them to the Zoo yet, but that is on the horizon. We get a special Zoo pass at Loves, so we will use it soon.

I have had a ridiculous allergy cough for the past 2 weeks and I'm so sick of it. I've went to the Dr. twice for it, and so far we can't get it much better.. But I think the stuff I'm taking now is working better, b/c I don't sound like a hacker today (AS BAD).

Last week I went to Hobby Lobby to get some stuff for the girls Bday party projects I'm doing.. I actually saw a grown woman take yarn and throw it at the cashier! Apparently she didn't think the line was moving quick enough, so just lost it, and threw the yarn.. At what point do you get in your life where throwing yarn is acceptable? I'm not sure.. but it made me laugh..

These are the girls chalkboards for their bday. I love them. I got the frames half off at Hobby Lobby... and the designs came from Etsy. Then I jazzed the frames up with a little bling (of course I did).. They turned out perfect. I also loved their invitations, which also came from Etsy.. They were ladybugs with wings that moved.. SO cute. I might be getting a bit ridiculous with this party.. but they only turn ONE ONCE right!! 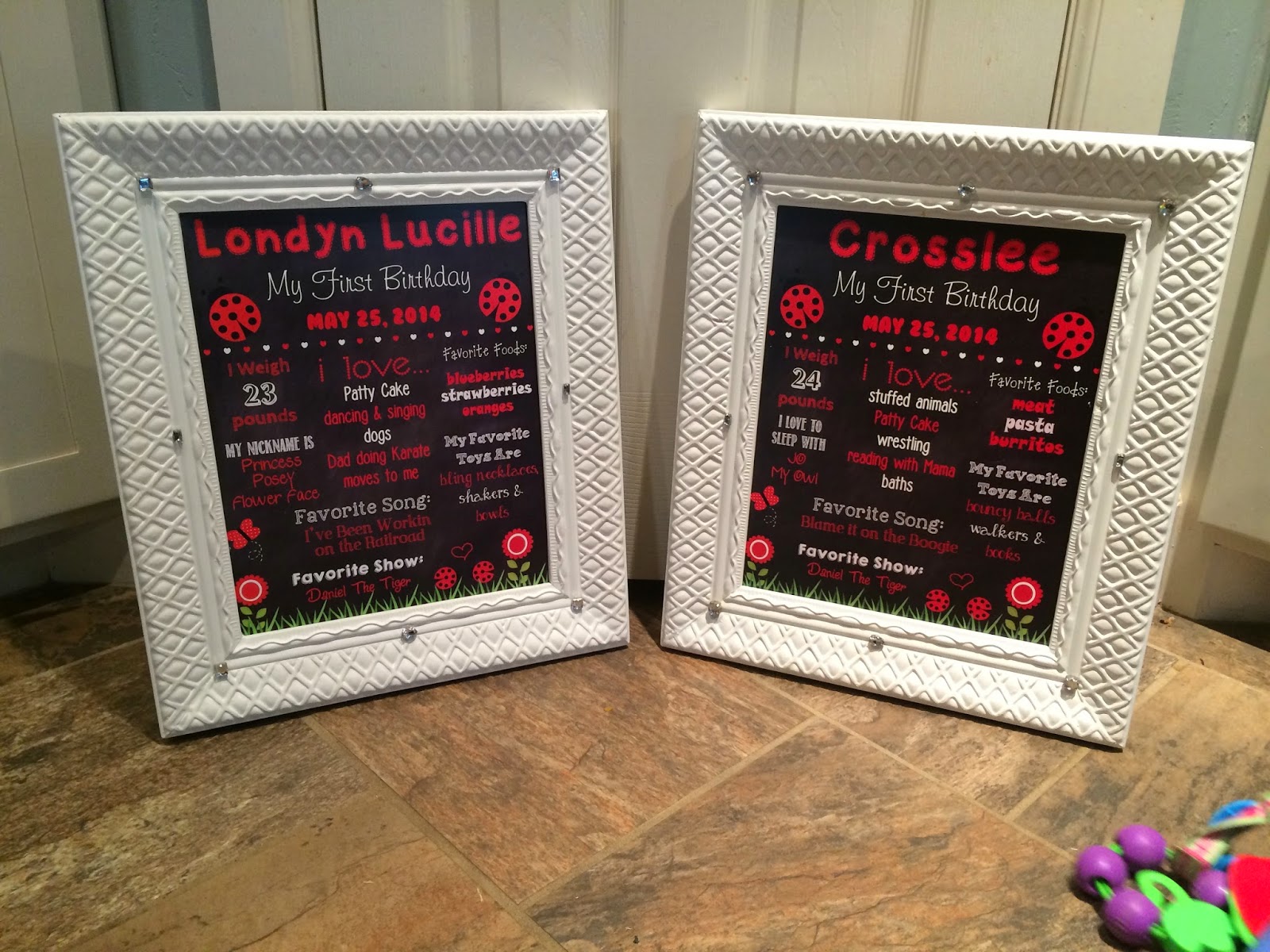