Well this year has just flown by! I can't believe we are already at Thanksgiving time..but I always love this time of year..I loved it even more when I drove to work this morning and the ChesaCampus was all lit up with those amazing lights..Man, they really go all out! So my hair is dark now..I must change it too much because I really can't tell the difference..but people tell me its very different..I like it though, and it was by MJ's request..
Being that it is Thanksgiving I thought I'd go over my Thankful list: ( In No Particular Order)
1) I'm Thankful to have an amazing family.. Especially around this holiday time I am thankful that I had a mom and dad who took me to church and allowed me to learn the true meaning of Christmas. I feel so sad for those kids who never get to go to church because their parents are too lazy to take them, or too crazy to take them. They miss out on the cool stories about Noah, Adam, Zaccheus, and more.. They also miss out on learning that even if they are around bad stuff, bad people and bad situations that there is always someone looking out for them, willing to help, and willing to listen..And to know they always have a friend in Jesus.
2) I'm thankful for a great boyfriend.. This has been an interesting year for MJ and I to say the least.. but we made it through it. He's my best friend, and even though most of the time I think I have him scratching his head about the things I do and say, he does love me..He's a patient man, and a sweet man, and to be with me, you have to have both of those qualities. Plus Payslee & Sawyer are crazy about him!
3) I'm thankful for a great job. I never thought I would enjoy anything after the radio business..and truth be told, I still miss it every single day, and every single time someone asks me about it. But I have realized that working for good people who actually want you to succeed at your job, and encourage you to do so is Amazing.. Not only that, but pay you well, reward you, and support you! Its been crazy, because in radio that is NON-existent. I've never had a boss that wanted me to go to training, or told me I do a good job..so this has really been a blessing.
4) I'm thankful to have an Amazing relationship with the Lord, and an awesome Church home. Crossings has been such a blessing to me throughout the years..Especially during some of my darkest days when I lost my job. I was surrounded by so many smart people who offered guidance and wisdom about the path I was on..and what I should be doing.. I look back now and realize that the Lord always has a hand in what we are doing..whether you acknowledge that or not..He's always in charge. At the time I lost my job, I lost a big part of who I was and felt like I didn't even know what I was supposed to be doing anymore.. Terry Feix said to me, "KC Did you ever think that God probably already knew you were great at radio, so now he's prepping you for something else?".. wow..Never even considered that, but Now I'm so excited about it! I've met an awesome guy at Chesapeake named Robin Wood, and I can tell that he is also going to be very important to me, and he's already a blessing..I have so many people around me that say they dont' go to church because they don't believe in "organized religion" or "I'm smarter than most pastors"..and the one that is the worst to me is "Your God is an angry God, and I don't believe in him..he lets bad things happen to good people".. those are the folks I pray for every night because I know they are hurting, and lost.. it took me a LONG time to find Crossings, but man, it was worth the hunt!
5) I'm thankful for my sweet dogs. Payslee, Sawyer, and Rally make me laugh every day, and they are so loving and cute.. I love the fact that they are so sweet and make everyone else laugh too. Payslee has turned into an amazing therapy dog who always seems to know just what people need..and Sawyer is so patient and gentle with everyone who loves on him.. Rally is almost 14 now and not going as strong as he used to, but he's still kicking on!
Those are my biggies..Now for some Random things I'm thankful for..
1)That Rob Kardashian didn't win dancing with the stars! I'm so sick of that whole family! I don't want to hear anything else about them!
2)My Iphone 4s.. Siri is amazing..and so is the Iphone..Man I love that invention!
3)American Horror Story.. What a great show!
4) Spray Tans.. Who knew you could look so dark without having to lay in the sun and get cancer!
5) Good Hairdressers..without Nicole at Changes my hair would not be as fabulous!
6) Popcorn..who cares about the movie..give me the popcorn!
7) 30" computer monitors.. Its like looking at a big TV at work!
8) Thyroid Meds..My metabolism is -36%, and this is supposed to kick it up a notch!
9) Woofs Gone Wild--without this awesome store, I couldnt order Miss Payslee so many cute dresses!
10) New Friends..This has been a year of meeting new people and trying new things..and I'm so glad I did it!
Hope you all have an amazing Holiday, and be thankful for What God has given you..
For each new morning with its light,
For rest and shelter of the night,
For health and food, for love and friends,
For everything Thy goodness sends.
~Ralph Waldo Emerson
Posted by KC Sheperd at 8:23 AM No comments: 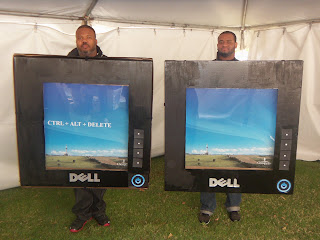 Well being that most of you know how crazy competitive I am, it will be no surprise to you that my team WON the Chesapeake Skit Contest for Halloween! Which means we walked away with a $2,000 prize! How great is that! I have been excited about Chesaween since I first got hired there because its such a big deal! They give away cars, trips, cameras, computers, TV's, vacations, etc.. So I was already on board..well then I found out you also got prizes for dressing up for Halloween, which I Always do every year.. So I was in the Hallway talking about Costume ideas and a person from my team said "You know we have never even entered the contest" and I was like "WHAT!".. so from that point on, we started planning..
We came up with a great idea called "Office Move".. it was a skit about having to change offices..For those of you who don't know, Chesapeake does about 5,000 moves per year..which means you will move from building nine to building 13, or building 5 to building 7..and so on and so fourth..so the skit was about the Computer equipment being sick of moving and not wanting to go. My costume was a "UPS Battery Backup" which is basically (for those non-IT people) like a giant surge protector that keeps you from losing all your documents and work if the power should go out..
I built my costume,

and also the costume of the "Desktop PC"..and all our costumes looked amazing! You can see the front and back of mine to the left..As you can see our costumes were GIANT and we fit inside them..We also had a giant phone, giant keyboard, two monitiors (shown above) and a mouse..It was a great skit and my team did awesome, so we were thrilled that we won!
So the Halloween party was awesome..I didn't win a car or trip, but was happy with my portion of the $2,000 prize for sure! Plus there were some amazing costumes, Gene Simmons from KISS, The Swiffer Wet jet girl, Whole Foods, Zombies, smurfs, etc.. If you want to see the pics go to http://chesaween.shutterfly.com/ I tried to take some pics of the best ones.. The whole party was great!
Payslee & Sawyer looked so cute in their Bee Costumes..Sawyer was a little apprehensive at first, but then realized he was really cute and started hamming it up. We've been visiting a couple that has been married for 65 years and met during WW II. So cool to hear their love story of writing love letters and building their own house..Very neat people.
On another high note, at Chesapeake they do something each year called a "Health Check" encouraging good health with blood pressure, cholesterol,

glucose, etc checks.. And if you pass it, you get a $300 bonus at the end of the year, and money off your insurance premium..So I went and had mine done last week and I passed! So that is awesome..it also showed the problem with my thyroid..Apparently a normal working thyroid operates at a 1-3 range (I dont really know what any of that means) but mine is operating at 6..which means its really not working at all! Well this was really good news because my metabolism was a -36% and I have been working out for 3 months and not really seen any weight loss or results..so now we know why! So I have some thyroid meds that I started taking today, and I'm really excited to see if that helps with the weight loss..
MJ has a new hobby now.. Hunting wild pigs. Lol. He has been going with his friend who has land near Ada, and the wild hogs are tearing up his land..So far they have

shot....NONE...but he's going to try it again tonight. Being that he is a 'city boy'..he has not had the pleasure of hunting like most of my family has done all my life..so now he's getting excited about Deer Season, Turkey hunting, and anything else! This is the first time he's ever been able to shoot his assault rifle, so he's been having a good time..and his next hunting trip will be to the farm to shoot a Turkey for Thanksgiving!
They are tiling my bathroom this weekend..and its such a pain..3 day event.. and I cant leave my house.. blargh. Already sick of that.. Also sick of anything pertaining to the Kardashians, because that whole family is full of media whores.. and I was sad to hear about Andy Rooney.. My mom always loved him, and turned me onto his 60 minutes bit a few years ago..I loved him too, but so cool that he got paid to give his honest opinion for so many years.
Things I love right now:
The TV show "Happy Endings
The Song "Mr. Know it All" by Kelly Clarkson
The Song "Easy" by Rascal Flatts
The Fact that I now work for an amazing company
Sawyer's new Haircut that makes him look like a little Chinaman
Cafe 7 (if you haven't been here..its so good..and everything is $7)
MJ & My Family
My Church and Church Family
Don't forget to take time to count your blessings for the things that you love!
Posted by KC Sheperd at 5:44 AM 1 comment: