Cross has LEFT the building..

Well we are getting braver.. We have now had 3 or 4 successful (for the most part) outings with the girls.. We realized that if you go to LOUD places, no one can hear your kids cry, so that is a bonus, and that is what we look for in eating establishments now days.. Good food? ehh.. Loud Music? DING DING! So yes, we have been frequenting S&B Burger joint.. they play loud music, and we also happen to love the food, so its a win/win..

We took the girls to Church last weekend. Crossing has an atrium where they have a little coffee shop, book store, and jumbo tron.. on the Jumbo they are showing the actual service while its going on.. So we can sit out there with the girls and not disturb people when Cross squeals out like a Pterodactyl. So that has been awesome.. Then we took the girls to Sunday School after that.. That was NOT so awesome.. Cross liked the attention in the beginning, but then she got bored with it and became unruly. So I had to take her outside, where we spent THE WHOLE class.. Of course she eventually fell asleep.. but by then class was over.

Over the Weekend we took them to see Jordan's dad and step mom in Norman.. they are much better riding in the car now, so that is a blessing. We went to lunch (S&Bs in Norman, lol) and they did great.. Then e went and hung out at their house. Crosslee loved the back yard and spend most of her time looking around at all the pretty flowers. Then We went to Chelsea's twins birthday party. My sister Lexi and Cousin Joe were going to be there, so we all met up.. IT was a circus theme, and very
cute.

We also attempted the nursery for the first time on Sunday.. with not much succss I might add. I got the text 20 minutes into the lesson "Please return to the nursery".. Got there and Cross was in a fit of rage.. screaming uncontrollably.. So I took her into a quiet room, turned up Michael Jackson "Blame it on the Boogie" and got her to quiet down. She is a girl that loves music. She comes by it honest. You have to turn it up, and turn on Michael.. Gospel, Oak Ridge Boys, Rascall Flatts.. Those are good.. but they won't work when she's raging. She needs Michael. I'm going to try to video tape it, because you can watch her; When the song stops to go to the next, she starts crying again, and then when Michael comes back on..she quiets.. Its hilarous. And hey, she has good taste..

We also went to our first small group meeting with our church friends.. We were brave and took the girls and they had a great time! Cat (awesome church friend) carried Cross around and she was happy as a Lark.. She likes to be entertained.. Londyn had a good time too just watching everyone.

This weekend Gigi is coming up (Gi-Gi=My mom) to play with them.. They will be excited. They are getting to the point where they are more interactive and full of smiles.

So here's something for you.. Most of you who know me, know that in the past I've had weird issues with birds.. they flew into my house 6 times when I livd on Lynn Lane.. and would swoop me.. They wouldn't get out and it was bizarre.. At this house they sit on my window sill and peer in.. They try to fly into my car.. its odd. So you can understand why sometimes when I see them peering at me, I freak out a little.. Well last week I was leaving a building on the Chesapeake campus and for some bizarre reason, when the man opened the door I thought he was a bird coming inside the building.. lol.. NO CLUE on this.. It was dark..there was a tree outside..thats my only excuse.. So I put my arms up in full on defense mode like he's going to attack me.. This of course freaks the man out and he says "Oh my, I'm sorry".. well by this time I realize its a man, not a bird, and I feel like a moron.. So I say (digging a deeper hole and making myself appear more crazy) "Oh, its ok, I thought you were a bird".. Nice Shep.. nice.. The guy looks at me like an insane person.. Then it makes me laugh because I'm so stupid, and I can't get control of myself.. So now I've 1) acted like he was attacking me even though he was just walking into a building 2) told him he was a bird 3) laughed uncontrollable while I walk off where he can still hear me.. Great. Super professional..

So then I get to the car still laughing like a banshee and call MJ.. of course I'm laughing so hysterically that he can't understand me.. So the awesome story was wasted.. lol.. This is why its unfortunate that I'm not on the air anymore.. because this kind of crap is too good to make up.. lol..

Its all fun and games.. Until you have two.. 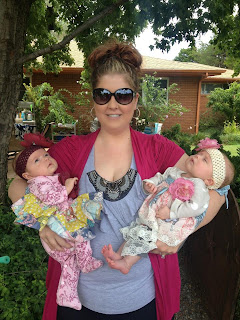 Well I think I can successfully say we are 'over the hump'.. Lol, or at least on the downhill slide.. This past weekend we took the girls to the farm, and it was a success! We took them to see Pops & Grammy Joni, and they had a great time.. Then we were able to take them to Mom's Church (Trinity fellowship) and let she and Papa Steve show them off.. Yes, My mom might have went a bit overboard with their outfits, but they did look like living dolls!!

Church is about an hour and 45 minutes.. I just knew for sure, we'd make it for about 10 minutes.. lol.. I mean, I have good babies, but they are still babies, and babies cry and fuss.. Especially if your name is Crosslee..so there's that.. The funniest part was Cross LOVED the music.. she would be quiet and watch when the music was going, and then fuss and squeal when they would pray.. Apparently she doesn't care for prayer right now, lol. So once Pastor Andy started preaching, Jordan took Cross outside and they were able to listen in the lobby.. Cross was nice out there as long as daddy was rocking her, so she went to sleep.. Londyn acted like an angel, and went to sleep and didn't make a peep..

Everyone says that Crosslee acts like me, and I'm "Payin for my Raisin'.. WEll this could be true, and everyday I thank the Lord that there are not TWO of her.. Yes, she is hilarious.. she smiles with her whole face, and when she is 2 I think she will probably be on TV dancing and singing somewhere.. but as a baby ME, she's a little hard to handle.. lol.. For those of you who know me, you know what I mean.. She loves music.. she loved being in front of the church (When they introduced us to mom's church).. She loves outside.. She loves animals.. and she has a high sense of urgency.. (Yes, she wants it now..no waiting)..She will smile for you, but you better do something funny for it.. No smiles for free with that one. She also doesn't want you to kiss on her all the time!  She is mine.. 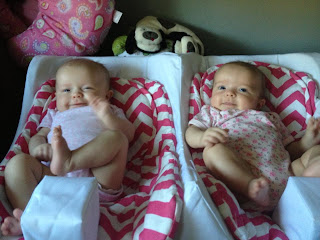 Then there is sweet Londyn.. We think she acts like MJ.. She's pretty well content as long as she's had a nap, and food.. She's so sweet, and she looks just like a gerber baby! She smiles when you talk sweet to her.. She really only fusses when you change her clothes.. She hates that and acts like you are chopping off her head when you do it.. She loves to be rocked and cuddled, and she lets you kiss her as much as you want. She is MJ's..

Isn't that cool how God works? One of each with such distinct personalites at such a young age. I tell you, we did NOT plan for twins, and it pretty well scared us to death, but now we couldn't imagine how it would be with just one of them. We are a pair, and they are our pair..along with our pair of furry babes, Payslee & Sawyer.. Its a complete unit, and a great one at that. If you ever want to know how God works, just ask us, and we can tell you and show you our story.