I met the man who would become my Husband.. I became an IT project manager.. We bought a house..  I married the Love of my life... We decided to have a baby... ONE Baby.. We prayed about that baby.. God laughed at us and gave us TWO babies.. AT THE SAME TIME.. I started leading a small group at Church.. We survived years 0-4.. We changed jobs a couple of times.. And here we are! 7 Years later!

All of that.. its a Lot.. happened in those 7 years.. and while I've loved every second (well most of those seconds) I've never stopped wanting to go back to doing what I love.. which is Radio. I was blessed early in life to find out what I'm supposed to be doing with my career, and got to do it for 13 years.. and its true.. if you do what you love, its never a job.. Now.. does it still have crap that comes with it? Sure.. but I was still doing what I loved everyday.. at least for 4-5 hours.. and I could suffer through the other 3, and the other ridiculous people that came along with it..

But.. a few weeks ago I got to thinking.. I have a little more time now that the girls are older.. and I think I'd like to get back into it on a part time basis. But there was really only ONE station I wanted to start with, Hank FM 99.7. So I pulled up their website, and hit the 'contact us' link.. and emailed them.. Shockinly enough.. they actually emailed me back! Within a few day we had setup an interview and I went in and met with Hank's Program director, and Morning show guy, Joe Friday. I told him what I wanted to do.. which was to be a really great part-timer for Hank.. He was excited.. I was excited.. and the rest is history! I start the new Part time Gig tomorrow! I'll be on the air from 1-5 on Saturday and 12-4 on Sundays.. so please.. Crank it to hank! You can listen online, and they also have an app! What! So that is something I'm super excited about! 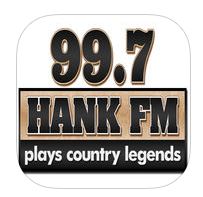 In other news.. girls are still swimming up a storm.. Cross without Floaties, and Londyn with hers.. Pops & Grammy (Kirby and Joni) took us all (Grant, Lexi, me, Spouses, and Kids) to Great Wolf Lodge last weekend and man we all had a great time! We had 6 kids 4 and under! All the Cousins love each other, and were so excited to see one another! They all had a blast hanging out with each other and racing around Great Wolf.. doing slides, water guns, swimming, splashing and just having fun.. and we all got to hang out and enjoy each other and the kids! It was pretty crowded on Saturday, but on Friday and Sunday it wasn't that bad.. and the kids enjoyed it the WHOLE time anyway! Its actually really nice because you really don't have to leave the place if you didn't want to.. they have restaurants, little stores, arcades, shops, etc.. And.. there's a groupon right now for it if you want to check it out!  We were also celebrating Pops Birthday so we took him out to Pappadeax, which was excellent.. So Thanks Pops and Grammy for a great weekend! 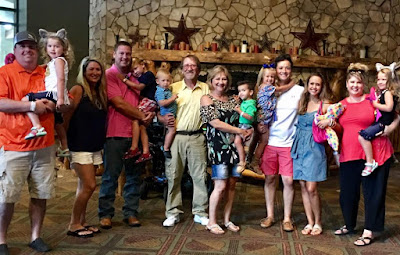 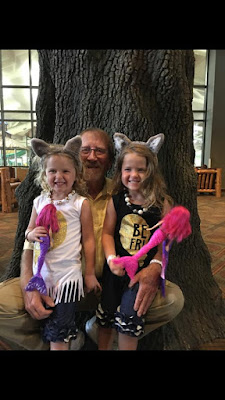 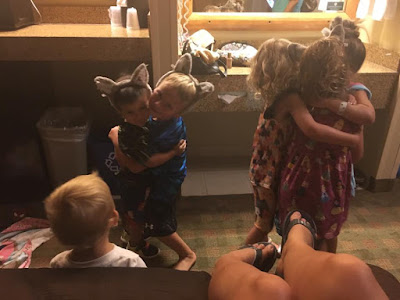 I can't believe its almost time for the girls to start Pre-K.. They will go on August 21! So many things to worry about.. and so many things to celebrate.. but "School" makes it real that they are 4! I feel like age 3 just flew right past! The girls are very entertaining right now.. Cross told me this morning that she has 4 baby chickens at her work.. and she drives there in her purple car and makes 2 coins each day! lol.. Londyn will look at us and say "Hey Baby Baby" but it sounds like "Bay Buh Bay Buh".. They love Bruno Mars songs.. and their favorites are Uptown Funk, and 24K magic.. I've had to remind them several times how important the "N" is in Funk.. lol But.. they just love all music which I'm super grateful for.. Now to get them to love Me on the radio.. on Hank fm.. You guys have a great day!

Well its been a whirlwind of events this Summer for us!!

Since our Nanny Quit, we had to find a place for the girls to go on Short Notice.. ITs going really well so far, and they will start Pre-K in the fall.. They are still getting used to the idea that they have to go somewhere every day.. They would rather, actually, just do what they want all day.. But.. wouldn't we all! I think the hardest thing for me has been how she just left and didn't say goodbye to them. I mean she was with us for 4 years! Its really unfortunate when you 'think' you  know someone and you don't.. but that is a life lesson we are always learning right? Anyway..

We've also been busy swimming.. Now that the girls have finished Swimming Lessons.. all they want to do is swim! Cross wants to swim under water and see how far she can get to me.. and Londyn just likes splashing around and going under sometimes.. They can swim at Gigi & Pa's, Grammy's, and at GT & Nana's, so there's LOTS of swimming places, and that is what they like to do when they have a spare minute! Cross is getting braver and braver with her swimming, and Londyn is too.. She's come a long way from Slapping her swim instructor in the face and pulling his hair.. so there's that.

The girls went to the farm a few weeks ago and spent a few days with Gigi and Pa.. they had an amazing time and every day was a new adventure.. They went fishing for the first time at the Creek.. but they didn't like it when they caught a fish, so that was short lived.. but they love venturing into the water and wading.. and searching for things.. 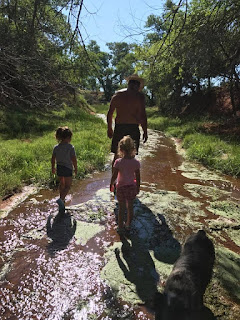 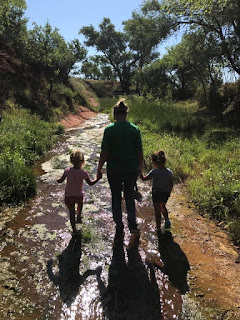 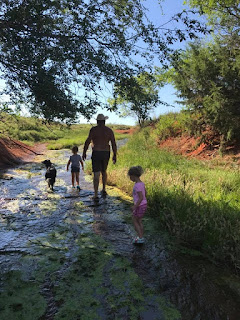 They also got 5 new Chickens.. they named two of them Rachel.. Yup, Both Rachel.. Then they have Tracy, Stacy, and Molly.. the others have not gotten a name yet.. I'm sure they will. For awhile Cross would say she was going to Eat Molly.. but she's stopped now, lol.. Both girls are at the stage right now where they say some hilarious stuff. For example today Cross told me she was going to work in her purple car, and I could come see her chickens while she worked on her computer! 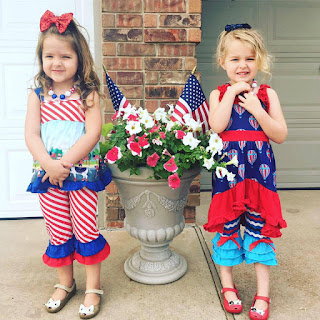 Don't judge me, but the girls love Bruno Mars music.. and I can't blame them.. However, when singing "Uptown Funk" I've really had to stress the importance of the N in FUNK.. lol.. if you  know what I mean! They both love singing that song, 25K Magic, and Perm.. But its catchy.. I like it too. They've recently started liking Taylor Swift (Shake it off) and Aretha Franklin (Baby I love you, thanks to gigi) and they really just LOVE music in general.
They are also SUPER Tan.. I don't even know how.. I slather them in Sunscreen non stop.. But they are so tan. 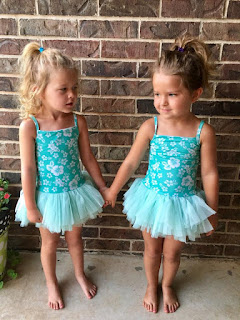 They've also been taking gymnastics, at Metro, and going to School Of Rock.. Its a place in Edmond where they learn to Play instruments. They don't get to go a lot, because we aren't around every weekend, but they like it. They get to beat on drums, play guitar, play on the piano and sing. Its fun, and since they love music, they love doing that.. So we've kept them pretty busy. We have not enrolled them in any 'sports' like Soccer, T-ball, or anything like that.. Because those things usually happen on the weekends and we really value our weekend time with letting the girls go to the farm. Plus, I honestly think.. if your kid is going to be great at sports.. he can still be great at it starting in the 3rd grade like I did.. lol.. "back in my day we didn't go to T-ball at 3!We Were playing in the Horse tank!!".. I know.. I know.. 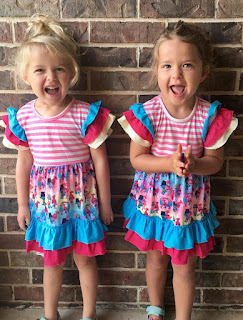 I'm still going to Orange Theory Fitness.. I've been going faithfully now for 4 months.. I started out doing 3 days a week.. then 4.. and now I'm up to 5.. Is it a kick in the butt? YES, Yes it is.. but I do love it. I haven't worked out in like 20 years.. So I knew I had to find something I really did enjoy.. and thats what I have at Orange Theory.. If you haven't heard of it.. its a go at your own pace full body, hour long workout.. You work hard, but you work at your own pace.. because Lord knows I was NOT in shape when I started, Heck I'm still not where I want to be! But.. I'm getting better.. You do Cardio, Rowing Machines, Weights, TRX equipment, and you do something different every day so you don't get bored. You also have a trainer who pushes and encourages you, and you get to work out with great people.. If you ever want to try it, let me know.. we are doing Bingo this month, so I get to take workout friends for free..

I'm also still doing my lipsense.. I'm having a Christmas in July Special until Sunday, so if you need lipsense, join my group.. Cross loves posting lips videos for me.. she's a natural.. Join me here: Talkin Smack with Shep.

And.. this weekend.. we are headed to Great Wolf Lodge for the first time.. Pops and Grammy are taking Grant, Lexi & I, and all 6 grand-kids for the weekend.. Its going to be a great time with all the cousins! I think everyone will have a great time.. and I did look and they have a bar.. so maybe the adults will survive too! ha! You guys have a great weekend!

Posted by KC Sheperd at 7:00 AM No comments: