For those of you that have followed my blogging about the girls.. You might remember at the young age of 2 months old, My sweet Crosslee had kinda turned into a jerk.. She would go into these fits of crying rage and we had no idea how to soothe her.. Until I figured out her trigger.. Michael Jackson Music. I remember sitting in Sunday School class, and getting the dreaded text from the nursery: "Please come to room 234 in the nursery".. which mean "Your child is hollering and we don't know what to do with her"... So I would go.. I would get her, and take her to a quiet room in the church and play "Blame it on the boogie" and all was well in the world.. This is one of the first signs that I knew that this was MY blood in her veins.. lol. Watch in this video.. At first I'm playing "Happy".. which only makes her sad.. Watch her little face as she hears the first "Wooo!" from Michael..

Now her love from him has grown into a fascination.. She watches the "This is It" and thinks that every fedora, or sequin jacket, or sequin anything really is a "Michael Jackson' Outfit.. When she puts on anything sequin, or shiny.. she will run up to people and says "look.. its my Jackson bow.. or my Jackson pants.. or my Jackson jacket".. People find her bizarre.. and I can't say that I blame them.. lol.. She's been wanting to wear the same Silver sequin pants for the past week.. she digs them out of the dirty clothes.. She also loves this jacket.. I might have setup a photo shoot.. 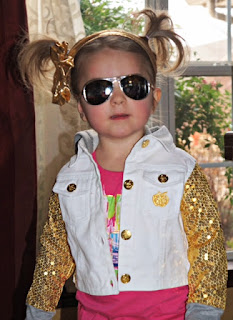 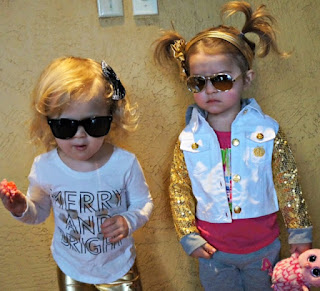 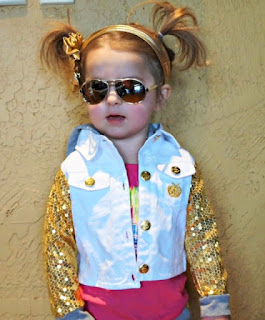 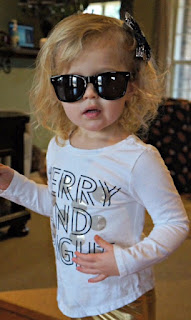 Well I can't say that I have done anything to deny her fascination either.. I mean Gigi & I have bought her sequin pants.. (Although we aren't the ones that named them Jackson, she did that on her own).. So Now I've decided to just embrace it.. Because Londyn loves him too.. We have been having dance parties to Smooth Criminal and Blame it on the Boogie.. those are the 2 favorites.. They both LOVE Smooth Criminal..and when they hear it, they immediately start running around like crazy people dancing.. They also love the Michael Jackson Dance Experience on the Wii.. They really only like the Smooth Criminal Song on that one.. but they will watch "Bad" and "Billie Jean"..

As you can see.. She loves this.. She's like this every time it comes on.. and she will say "Mommy Dance!".. So.. I feel like if its something she is this excited about.. why not embrace it.. So without further adeau, I'm here to announce the "THIS IS IT--Crosslee & Londyn Birthday Bash"..  Yes ladies and gents, we are throwing a Michael Jackson birthday party.. Complete with "King of POP-Corn".. Thriller Water.. PYT (Pretty yummy Treats).. It goes on and on.. MJ is already frightened.. But I'm already seeing VIP Passes, Red Carpet, and Sequins dancing in my head. I've already ordered the sequin gloves..and sequin Socks.. and I'm on the lookout for the perfect birthday outfit.

Will it be ridiculous? Over the top? Too much? Gawdy? Oh yes.. You better believe it! Keep in mind, this isn't until the end of May.. but I'm a planner.. and these events don't just create themselves.. So.. stay tuned.. All I can do at this point is Blame it on the Boogie...

Posted by KC Sheperd at 8:11 AM No comments:

When you split your pants..

Well continuing the saga of my ever embarrassing, choking, life...

Last week Jordan and I decided to grab the girls and head to BJ's for dinner.. I love BJ's for a lot of reasons.. 1) They have big, round booths.. (Big Round booths are great for trapping your children.. while also giving them freedom to play and enjoy dinner..) 2)They have Dark, DARK beer. I am a fan of Dark beer. They have a Tatonka Stout which I find delightful. 3) They have Pasta.. and Pazookies.. Pazookies are half-baked cookies in a skillet full of magic and wonderment. Its delicious..

So as we are about to pull up, I reach down.. and realize I feel something weird.. That something weird.. is my flesh.. I have torn my pants in the crotch area..  Now.. at this point I have two options. 1) Go home, change pants, go back out.. or.. 2) Power through this.  I chose option Number 2.. Now you might be saying, "KC, have you no self worth?You are seriously just going to go into an eating establishment with torn pants?"..... Hi, sorry.. yes.. Yes I am.. Because I needed a Beer.. and I needed some Pasta.. and those car seats are a huge pain to get the girls in and out of.. Because we were already there and I didn't want to turn around and go back.. Because I was hungry.. I mean I could go on.. but I won't.. The good thing is.. No one seemed to notice the big pant rip.. I wore my coat.. and didn't gallivant throughout the restaurant.. So I felt like it was a win. You'll be happy to know, I did throw the pants away.. and not continue to wear them.. 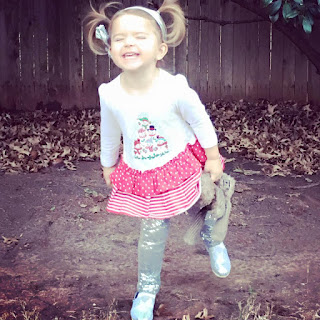 Crosslee's obsession with Michael Jackson is still strong. Its mainly about "Smooth Criminal" the song, and wearing sequins or glitter, or lame' or anything shiny. Those are the things she associates with Michael.. For Christmas, she got several pairs of sequin pants.. Silver and Gold seem to be her favorite.. This week she wanted to wear the silver ones to church, so we put them on.. but when we got home, we realized she had torn a hole in the crotch.. Jordan's response "Like Mother, like Daughter".. lol... 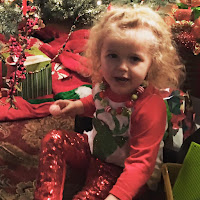 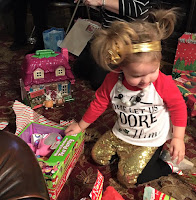 These are some more awesome examples of 'Jackson' pants.. As you can see, Cille likes hers pretty good too, but she doesn't demand to wear them every time she goes out of the house.. Its really unfortunate Cross wasn't born in the 80's.. she truly fits the part..

IN other news.. Londyn has officially become "Normal"... if you recall when she was 18 months old our Pediatrician recommended we have her evaluated because she didn't say very many words.. MJ and I were never really worried about this.. but we knew she wasn't where she was supposed to be vocally.. so we took her to Sooner Start.. We got synced up with an Amazing Therapist who has worked with Londyn Since then.. and now she is officially being discharged from the program because she basically never shuts up. I will say, that as her mom, its been hard.. its so hard not to compare your child to other kids.. or even their siblings.. Our Therapist always assured us that we were doing the right things, and told us little things to work with her on..and with her help, Cille Blossomed! She is now talking non-stop, counting, coloring, naming colors, and is a little social butterfly.

Cross is a very Precocious learner.. She's weird, and does things way before she is supposed to.. being that we have 2, we wondered why Cille wasn't the same way.. but the answer is.. all kids are different.. and they all develop at Different times. At 2, Cille didn't know her animals, shapes, colors, or Numbers.. Cross knew all of this stuff and spoke full on sentences.. What I've realized through the process is that as long as your child is making any sort of progress...whether it be saying a new word, or even mumbling a new sounds.. ITS PROGRESS. So don't get too worked up about the timelines, and charts that your kids are 'supposed to be' reaching.. they will get there.. But.. also, don't ignore obvious things that they aren't doing, because early intervention is the key for sure.. So be aware. I was always reading and asking a million questions being that I had never had kids before..

We are headed to Western Oklahoma this weekend. Pa & Gigi.. They will be gone the next month of weekends to stock shows and such.. so we are going for a quick Visit this weekend... Then we have Cousin Luke's 1st Birthday Party on Sunday.. should be a fun time! 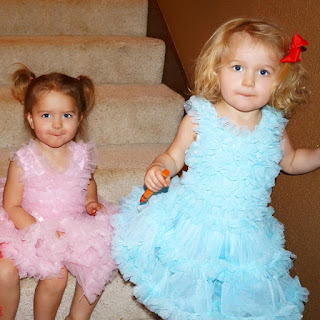 Posted by KC Sheperd at 9:06 AM No comments: