Tell me Something good.. 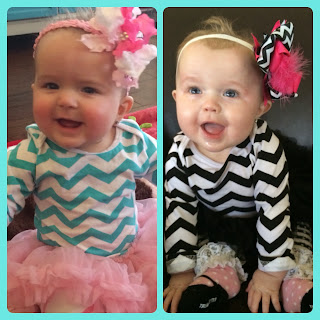 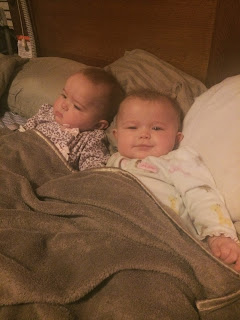 Well we have been having a good time with the girls! They Love Eating.. Well they really just love everything. They are the happiest babies ever. Every morning when we wake up we go in and get them.. (they wake up about 5:30) and then we bring them into our beds.. I put on my makeup and Jordan goes to take a shower and we all watch the Weather together.. Then we all go to the living room and they start playing with their toys. They will sit and entertain themselves for a LONG time.. We are so fortunate. They are also starting to take notice of each other and laugh and giggle at each other. Cross still wants whatever LL has, but thankfully LL doesn't mind sharing, and she just takes it back after Cross is done with it.

Crosslee has also decided she is going to stand up on her own.. Yesterday she just pulled up on her car and stood there looking at me.. like "What? I can do this if I want".. and she would hold on with just one hand. She's CRAZY strong. She just kept doing it. and doing it.. She's still not crawling forward, but she will roll, then sit up, and then roll to wherever she wants. She has also started standing up while in her baby cage.. like "LET ME OUT".. but she's really doing it more to stand than because she wants out. 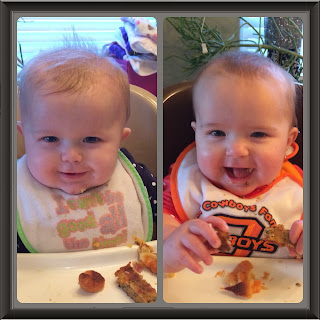 They are doing so good on their eating. I cannot even tell you how many things they have tried, and loved.. I'm so glad we are doing Baby Led Weaning because I've really had a good time watching them get better and better at eating..and eating more and more stuff.. For example, Crosslee had a cinnamon roll the other day and LOVED it.. LL loves eating pineapple spears and oranges. Cross loves all meat and we gave them Teds the other day.. They LOVED their flour and corn tortillas and I put cheese, guac, and beans on them.. They gobbled them up. I really feel like this is going to help them not be particular when they get older..because they have tried so many different, unique things. And they LOVE it. Cross starts vibrating when you put her in her high chair because she gets so excited about food! I made them sweet corn fritters, tuna cakes, and they had French toast sticks this weekend.

So I finally got rid of a TON of the girls stuff.. a TON.. I found someone who is having twin girls, so she scored some of the best stuff! I was so glad it was going to some cutie twin girls, and also that I was able to just GET RID of  some crap. It was becoming overwhelming.. so it needed to happen. Now if I can just get it all packed, shipped, and picked up, I'll be good to go!

Work is going excellent. Love my job and the folks I work with. One of my former contractors at CHK was hired at Loves on my team, so I'll be excited to have him on board over here too. I miss all the folks I used to work with, but I'm excited to have new ones around, and to be working for a great company. MJ loves his job too at AEP. We are both very blessed in that regard.

I'm still loving the Bobby Bones show on the Twister.. Still love Hank FM, although I'm disappointed they put jocks on it.. Not because I don't support the jocks, but because it appears they don't know how to run the board.. All I hear is loud music, dead air, and phone calls going out over the air.. so Hopefully that will get better. MJ and I watched a movie this weekend because Pops and Grammy J (Joni & Kirby) came up to give us a fun day while they watched the girls. We watched "Ride Along".. It was pretty funny.

Still haven't done the podcast yet. I was supposed to do that yesterday, but we had other things going on.. Hopefully this weekend for sure. I got the Mic to work and all my equipment ready, so now I just need the time to do it!! Hope you all have a great week!
~K

Posted by KC Sheperd at 6:34 AM No comments:

Well Welcome to a new year!! Its so weird to think that last year at this time I was big pregnant.. and you might be saying "Were you really that Big?".. Yes, with twins you pretty well blow up. I blew up when I was about 18 weeks pregnant.. I remember thinking last year at this time, "Holy Wow. I'm going to have two babies this year!" and how that blew my mind.. Well who am I kidding, it STILL blows my mind! Its just unreal that I was able to create two, Live, Humans!! God truly made the human body amazing.. especially the WOMEN's.. Because lets be honest, the part that the men contribute is the fun part.. not the break your back, bloated, painful, ruiney part.. Sorry guys.. So this year its a whole new time.. The girls will be turning ONE on May 25th. I can't believe they are 7 months old..Well yes I can.. because some of that went REALLY slow..but the past few months have went pretty fast. They are so fun and cute now. They make me laugh every single day by doing something ridiculous. Right now Crosslee is taking off..she Crawls backwards, rolls everywhere, and pulls up on stuff. I'm wondering if she is going to skip crawling and just go straight to walking. She seems to want to do that. I cannot imagine. I'm not ready for two Mobile babies!!

LL (Londyn Lucille) seems to pick up new things each day that are funny. Like right now she does weird things with her hands. She makes rolling motions with her fingers like "come here to me" and she does this funny laugh where she goes huhh uhhh uhh uuu.. Its bizarre, but hilarious. I can honestly say they are both the best babies. They sit and play by themselves without crying. They have started to enjoy each other and laughing at one another. Its so cool to watch them interact and know that they will always have each other. Twins is a very special bond that only they will have.. Speaking of Twins, I've met so many cool twin moms from Facebook.. we are planning a meetup in June. I feel like I know these women like my best friends, so it will be so fun to get to meet them and their babies in real life! More details to come on that.. So I know you are just dying to know what I did on New Years Eve right?!?!... Yeah, I was in bed by 9pm.. Lol. I know, I suck, but man these days after I work all day and come home to play with the babies and dog babes, I'm spent...MJ stayed up till Midnight and came in and gave me a kiss, and that was the end of that. Non eventful. I could try and blame my lameness on the girls, but I was lame BEFORE I had babies, so Its on me. Sorry. Lame.
In other news, we finally bought a new refrigerator.. After having one that made our butter taste like metal for the past 4 years, we threw caution to the wind and got a fancy one.. Its not that Fancy, but it does have a third drawer for MJ's Pop..He was super excited about this..I only care about having ice water, so I'm good to go with that. It looks awesome though, and really makes our kitchen look nice..

Job is still going great.. Girls are doing well..Life is good. We started up our small group again last night at Church, and I can't tell you what a blessing our small group is.. Its so nice to have a group of people to just talk to, pray for you, and know what you are going through. We love every couple in there, and I'm so thankful for them. Right now one of the things of doing is 30 days of gratitude for our spouses. Every day you say/do something nice for your husband/wife. I think this is an awesome way to keep some perspective in your marriage..with work, and babies, and life, its easy to get lost in other things other than each other, and I'm so excited to have a strong, solid, awesome marriage for not only MJ and I, but for our girls. I want to be those old people that hold hands on their way into church and talk about our keys to staying married. I love that.
Posted by KC Sheperd at 8:03 AM No comments: