Its hard to be cool..

Well Kids.. A Minivan Happened last weekend.. a Toyota Sienna. I had heard the Pro's and Con's.. and I really decided a long time ago that it was probably something we needed.. Saying this made me think of the Oak Ridge Boys song.. Enjoy..

Now, I hear some moms saying "Oh KC.. I swore I would never buy a minivan! "Oh KC.. get an SUV! They have just as much room!" "OH KC Minivans are not cool!".. Right. I hear you. But let me tell you something.. When you become a parent, you do a lot of UNCOOL stuff.. Like wiping Butts. Is that cool? No. No its not. Is lifting your kid up to smell their butt to see if they pooped cool? NOPE. Its not. Is saying out loud "Please don't eat the dog food" cool? No.. so for all of you that still think you are 'cool'.. This is going to be heartbreaking for you to hear.. but Alas. You are not.

Once you enter the realm of parenting, "COOL" goes out the Window.. Now hey, you might regain some cool points later, but you will never be full on cool again. You know why? Because your kids wont' let you.. and even if you are kickin it, thinking you are cool.. Most likely your kids do not think you are. Cross said to me this morning "Daddy is more funny than you".. so see.. there's that. 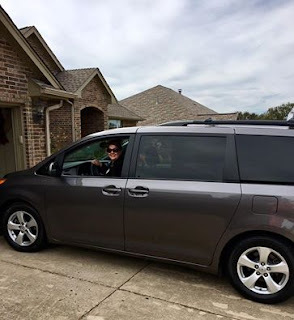 So. Don't judge my mini van. Her name is Dolly.

Speaking of things that aren't cool.. The Girls are still not Potty trained. And.. not only are they NOT potty trained, they really show no signs of ever wanting to BE potty trained. I remember, before I was a mom (You know, when I was cool) I thought.. Oh, if I have kids, we will save so much money by quitting diapers at 18 months. HAHAHAHAA! Jokes on me. Yup. Dangit. Cross is the closest of the two.. She will wake up in the morning, tell me she is going to wear her big girl Panties.. Tell me that she is going to Poop in the potty.. And then, by the time I've driven to work.. Poops her pants. So yay. Parenting Win. As for Londyn.. Yeah, Good luck.

Everyone has given me so much 'advice' that I'm ready to trach Chop them.. "It has to be her idea! She's still so young! You can't make her! No one goes to Kindergarten Pooping their pants! Hmm.. Well.. when I look at my VERY Unique children.. this last one doesn't do much for me.. I mean I have children that think Bloody Clowns are their besties, and sing Disturb's Sound of Silence, followed by It is well with my soul. So yeah, I certainly get that they are not 'the norm'.. So then I think.. Well.. Maybe I do have the only children that ARE going to go to Kindergarten Pooping their pants.. Add more cool points to me! I mean.. look at them.. 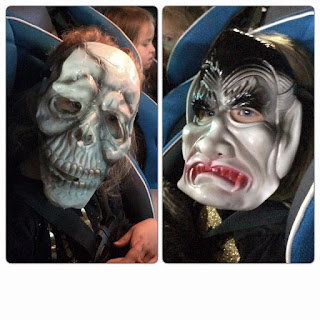 The Good news is.. I really don't care that much about being cool anymore. I feel like with my 13 years on the radio.. I did REALLY cool stuff a lot of the time.. So now its time for a bit of lame-ness. And I'm pretty Ok with that. Because.. right now, The girls still do think I'm cool.. I'm sure there will come a time (in the  near future) when they don't.. But right now I literally make magic happen by cracking an egg, and Showing them how to make Rice Krispy Treats.. So I'll take it while I can! 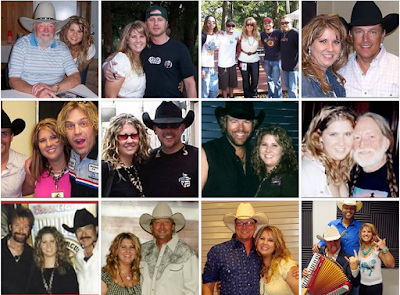 PS, My Minivan Doors Open with a press of a button. I have a sweet Sound System and Blue Tooth.. What more could I want!

It Is Well with My Soul

This time of year brings excitement for me. It always has.. When I was younger, this time of the year meant 1) My Birthday in September 2) October Halloween Parties.. 3) Fall Holiday Season. 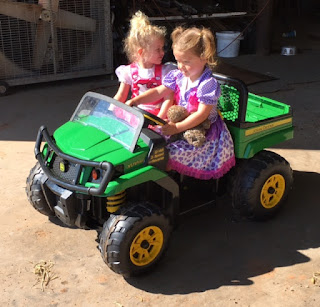 My mom has always been super excited about Halloween, so that made me super excited about it.. and now, for those of you who see my girls on Facebook.. you see my girls are super excited about it! They Love the ghoulish Skeletons, Giant inflatables, and everything else that goes with it. I know people think its ridiculous that Cross loves the Bloody IT Clown next door, but that is her dude. She shows no judgement.. he's just a guy thats hanging on a garage that makes her happy when she see's him.. Its weird, I know it.. but its also pretty awesome to watch how kids can see something that we find ugly and scary, and turn it into their best friend.

I used to get to have the best Halloween parties. We had an awesome big red/white barn, So we could have the party no matter what kind of Weather. We would come to "The City".. lol.. which is what we country people call OKC, and go to "MG Novelty" which is closed now.. but it was like the Party City back then.. And buy all sorts of ridiculous decorations. It was seriously one of my favorite things to do. Then we would go home and mom would come up with more creepy stuff on her own.. Like one year she filled plastic gloves with Oatmeal so they were like dead hands.. We bought a Coffin and put a skeleton man in it.. We would make Red Punch with plastic fingers in it.. IT was a great time. I loved every second of it.. Then we would invite a bunch of people from school and we would all wear costumes. Everyone looked forward to it every year. I'm excited to be able to pass along the tradition to my girls. Although, Honestly, Cross started out being creepy on her own.. 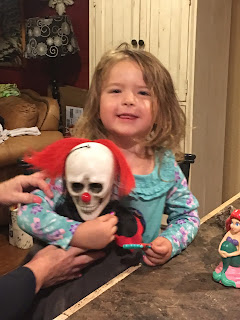 Cross and Cille still love the Inflatable "Giant" (AKA the Grim Reaper). He's back up in the back yard this year, and they love to watch him come alive in the mornings and go to sleep at night. Cille just ends up liking what Cross likes.. she's not scared of anything either. Cross does have a love for weird clowns. I can't say that I'm with her on that.. I don't really care for them.. but she thinks they are her people, so we just go with it. This year Cross is going to be a white Owl, and Cille is going to be an Octopus. I presented her with all kinds of cute costuming options.. a sweet kitty, a bear, a Horse.. but.. she chose the Octopus.. So there you go. 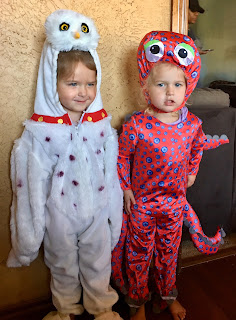 I also love this time of year because I love taking the girls to Pumpkin Patches.. If we back up.. this is about the time 3 years ago when I realized 1) I was pregnant, and 2) it was twins.. so anytime I feel the nip of fall in the air, It takes me back to a place of Joy, and sheer Terror.. at the thought of having twins, lol. But its a fun memory for Jordan and I to share and laugh about now. Especially thinking about when I told my mom and dad.. and My mom saying "See, I told you I was going to need more than one"..and My dad just being over the moon because "twins" had really never occurred to us! So this is one of my favorite times of year for sure. We are Taking the girls to a pumpkin patch this weekend in fact! There's so many great ones around here to choose from.

We had a great time at Balloon Fiesta last week! This was the girls first real Vacation-Trip, and they did really good. It was a 6 hour drive from Canute, so not too bad. The Awesome folks at Doug Gray Dodge in Elk City, hooked us up with a Tahoe, completed with DVD system.. so we traveled in Style! WE got there around 3 in the afternoon, and the girls wanted to go swimming. I had Tonsillitis, so I let them go with Gigi, Pa, and daddy.. They had a great time. 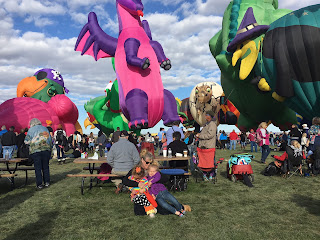 In the Mornings we went out to the "Mass Ascension" and watched them fly into the air. Pa went up into a balloon on the first day.. He had quite an exciting story to tell.. Once they took off, the Wind Changed and started blowing the Balloon into town (which they do NOT want) so they had to make a landing on private land  (which is Frowned upon).. the Wind blew their basket over and the skidded side-ways a bit in the basket, but thankfully everyone was ok. Pa told them how to get out of the field, and back to where the 'Chase team' can pick them back up. So he found the whole situation humorous, I'm pretty sure everyone else was freaked out! So it was a "bucket list" item for him complete with a great story! 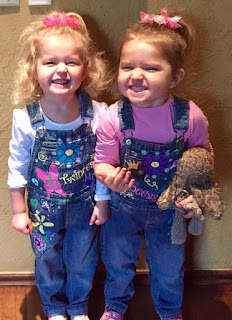 The girls enjoyed the balloons. Especially the special shapes. They loved watching the Big Dragon, Owls, Witches, and Scarecrow. When Cille saw the witch she said "Hey Witch, I'm going to punch you in the face".. I have no idea why, but it made us laugh. We had a good trip. IT was a good one to take the girls too. Not too far, lots of fun things for them to look at, and they are still talking about it.. so win win. I won't lie.. we couldn't have done it without Gigi & Pa, and it wouldn't have been nearly as much fun! So thankful for Good Grandparents! 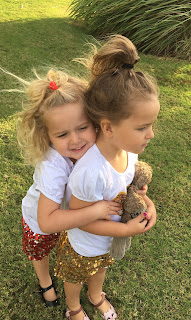 IN other Random news.. the weird growth in my mouth healed, so bonus for that. My mouth is so bizarre. I go to the oral surgeon Friday just to make sure its all ok. The Girls are still Loving going to Crossings on Tuesday/Thursday and its been so much fun to hear about their days. Its a fun time to be with them. They are trying at times, and they tag-team Jordan and I quite a bit.. but we are holding strong, and trying to Build little awesome people. There's a lot of days when I'm pretty sure I get everything wrong.. but when I have moments like this,I know we are doing something right..