When Life gives you Lemons.. Be one.. 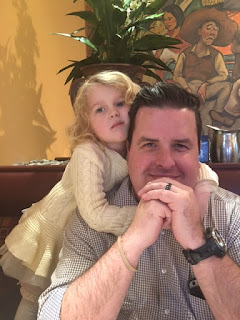 Well.. We are now on day 4 of Potty Training Londyn Lucille.. and I have to be honest.. It hasn't been terrible.. Last night we actually had a successful "Big One" in the potty.. She's actually doing REALLY good.. We are super Proud of her. Its sad that when you turn into a parent these are your 'rewards'.. Big Ones in the Potty.. lol.. Such is life.. I knew Times' they was a changin' two years ago when I was fired up about getting a Vacuum and a Mop for Christmas.. But.. we are on our way, and hopefully this will be the last time I talk about this.. because trust me, I'm sick of it too.. 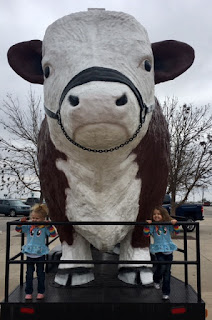 Isn't it funny the things you think will be so easy as a parent.. that turn into like the worst things ever? Now Granted, because I was never around children, I didn't have a LOT of expectations of myself on the parenting scale.. but I did think Potty training would be relatively easy.. I mean why wouldn't it be? Everyone does it.. But its by far been the worst thing.. I thought things like going out to eat would be terrible with twins.. but thankfully my girls have always been pretty great in public.. they mind.. they eat whatever you put in front of them.. and they are polite (usually).. but the Potty Training.. that is the one that kicked me right in the face.. I think it was the worst because just when you think you are at 100%.. Bam.. Pee in the floor.. Sorry for ruining this for you if you haven't gone through it yet.. but trust me when I tell you, Diapers will start looking better and better to you.. 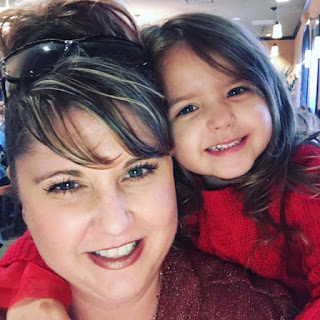 Anyway, Moving on.. I feel like I'm so behind on the girls party.. when in reality, I'm not.. but the difference is.. usually by this time I have a whole pile of things that I know I'm going to do.. Well since I'm doing "Twin O Ween".. I bought all the stuff last October and now I can't remember what I have!! Jordan's Aunt Martha also sent some amazing stuff.. and I don't remember what all that is either! So this weekend, Unkie B is coming over and we are going to get a handle on it! This year I designed the Invitations myself, and I'm working on the 'treats' to go with the 'tricks' for the party! I feel confident in saying it will be awesome..although I'm not sure I can ever out do the Michael Jackson party.. 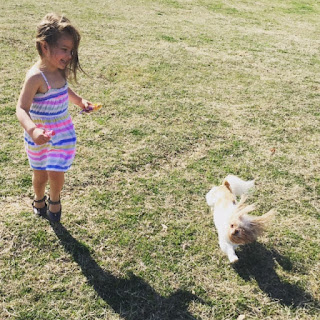 We took the girls to the OYE last weekend (Oklahoma Youth Expo).. They had spent the weekend with Gigi & Pa, so we all met at the Stockshow on Sunday. Cross likes watching the cattle show.. Londyn likes running up and down the ramps.. and I like the smell of Wood chips and Manure, so its a win/win for everyone.. I love the Big Cow they have positioned out front, and so do the girls..

This weekend we are getting our Cabinets painted. They are currently "Honey Oak" and Jordan has come up with a color scheme of Grey and White, so the tops will be White, and the Bottom cabinets will be grey. I'm excited to see how it turns out with my Bling Knobs on them! We found the woman who is doing it (Kari) on Facebook Marketplace, so I'll let you guys know how it turns out. She's going to paint the fireplace too, so I think it will really spruce things up! 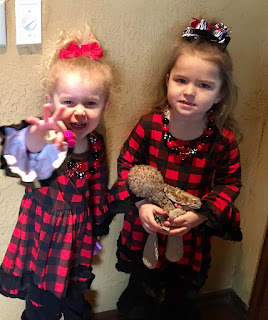 In Other exciting news, the girls got chosen to be Brand Reps for a fantastic Online Boutique, Tdazzled Too Buy.. The adorable Red/Black outfits they have on in this picture are from there along with a lot of other things.. So If you need really cute clothes (boys and girls) for your kiddo, go ask to join the group, and list BR 47.. that is the girls number, and they will get the credit!  I'll be posting more cute stuff from them in a bit.. I just got some of it in yesterday with "Trolls" on them, so we'll do a photo shoot in a little bit..

Went to Hatch OKC last weekend for breakfast.. if you haven't gone there yet.. get there.. You can thank me later. Its fantastic. Also still watching "Nashville" and "This is Us" and bawling.. I read "Big Little Lies" and now I'm watching it on HBO.. that one thankfully does NOT make me cry.. lol.. Also still plugging away with my lipsense biz! Just found out my check this month is going to be enough to send the girls to gymnastics this summer! Score!! If you ever want to try Lipsense, or even join my team, just message me at kcshep1515@gmail.com and I'll give you all the details!! You guys have a great weekend! 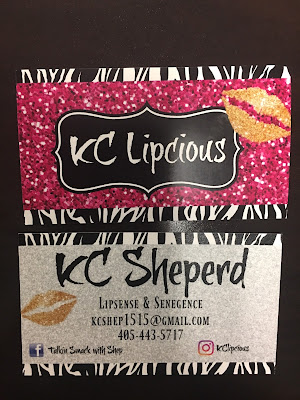 Well this year already seems like a whirlwind doesn't it? I mean.. January.. then Bam! We are in March.. 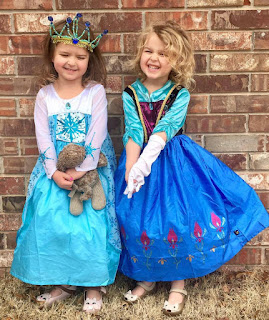 I've been planning the girls 4th birthday party.. Its going to be "Twin O'Ween".. Halloween in May. My girls LOVE Halloween.. and so do I.. so I thought why not! Parents spend all this money on Halloween costumes that their kids only get to wear ONCE at Halloween.. well now its twice for Twin O' Ween! Cross has been telling everyone her "Giant" and her Bloody Clown are going to be there.. Can't wait to see the parents faces with that.. lol.. As if the Michael Jackson party wasn't out there enough.. now I'm bringing a bloody clown! But.. My kids like unique things, and I'm going only encourage that.. 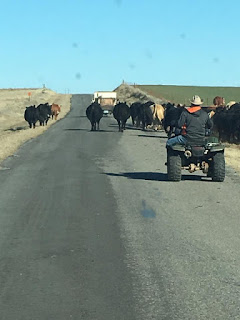 We've been doing big things.. We all went to Western Oklahoma last weekend and had a big time.. It was literally packed with something to do every second that we were out there.. We Stayed with Gigi and  Pa.. Here's just some of the things the girls did while out there.. They fed Kris & Woody (Donkey and Mini Horse) we helped get the chicken Coop Ready.. we rode the 4 wheelers.. we visited Pops and Grammy.. and at their house we played in the playroom.. ate at the red barn.. played with Frank the Cat, and Lilly the bunny... They got into the Fort.. Drove their cars outside.. Played on the swing.. Watched Shrek.. Drove the Tractor.. Went to a chicken farmer and picked out Chickens.. then brought chicken home.. We had a real cattle drive.. 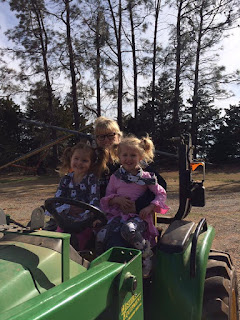 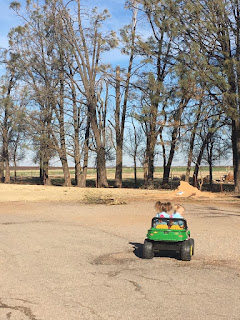 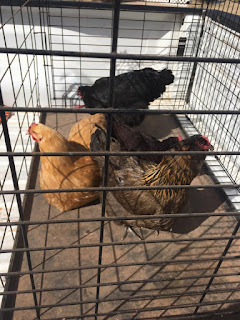 I mean yeah.. its literally never ending. And that was just 2 days. Needless to say.. when Jordan and I get home we are exhausted. But...... not the girls! They are still going going going.. I swear if I put fitbits on them they would track like 300,000 steps.

In other news.. Jordan's new job is going well, and my job is going well. I've really enjoyed the Lipsense Side business. It is allowing me to put back some money for the girls school in the fall, and its allowing me to have extra spending money for more of the girls clothes!!! haha! I know.. I can't help myself! The other fun thign, for me, is its allowed me to be creative again. I do stupid videos in my facebook group, or dubsmashes, or Snap Chat Pics.. Its just fun to be able to interact and entertain again,.. So.. If you haven't ever visited my lipsense page, its called Talkin Smack with Shep, so come on over.. 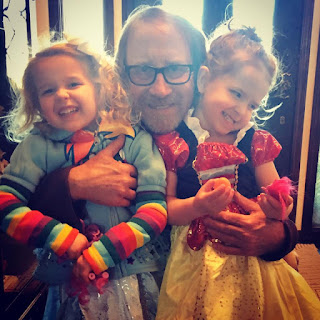 The girls are doing awesome. They love going to Crossings Twice a week and they really are just happy girls. We have successfully (so far, knock on wood) avoided all the sickness that has been going around non-stop. I've been so blessed in that department.. the girls and I seem to really stay healthy.. I mean I don't even know the name of our pediatrician, because we only have to see her once a year for well baby visits. 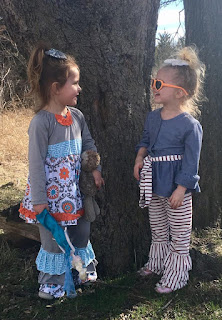 I do have a bunk foot right now.. I swear its because I'm starting Orange Theory on the 15th.. I think my body is frightened.. and it probably should be honestly. Its a workout that burns 1000 calories an hour and continues to burn after that. I know its going to be hard.. and I'm probably going to cry.. and then cuss.. and then cry again.. but I'm excited to just do something.. but I have to get my foot in shape, so I'm going to see the Foot Dr on Friday..

Cross still loves Michael Jackson and all things Sparkle. They both love Frozen, Trolls, and the Grinch. Londyn loves kitty cats.. Cross still loves Owls. She didn't want any chickens she told us.. she wanted Owls. She's been watching that Owl cam.. and she loves that! I love it too.. the Owls are such a neat bird. Even though you guys know.. birds and I are weird.. Lots of weird stuff with me and birds.. so there's that. They talk and play non stop.. they say hilarious things.. Cross says "Pofe Office" for Post office. Londyn says Cinderelly for Cinderella.. They both enjoy each other, and love playing together now.. they still fight, and sometimes they rare back and slap each other.. which is NOT ideal.. but its a relationship.. and all relationships have moments where we want to slap each other in the face.. its just more frowned upon as an adult.. lol.. But they are very very different little people and its so much fun to watch them. 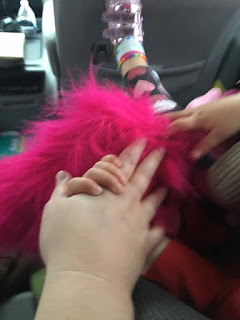 I sold their Cribs to a friend I met on Facebook. She's having twins, and is 16 weeks along. I tried to prepare her for whats about to happen.. but I don't think you ever really can. There is just NOTHING like being a mom of twins. NOTHING. Its so freakin Scary sometimes! It has moments of being exhausting, and moments of exhilaration.. its never perfect, and its never #perfection or #magic (because you know I'm not ever going to be a cherry pie that can write that).. but sometimes it is #hilarious #twinning #sweetmoment #sisters. Its just trying to raise good little people. That are respectful, smart,, kind, and curious.. without taking away their unique greatness. #parenting 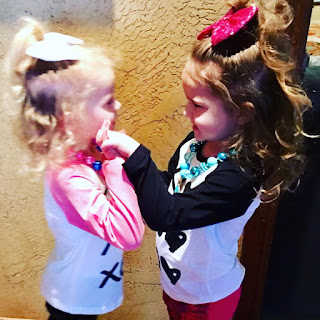 I'm still leading a small group at church.. still trying to do my hospice visits every two weeks.. Still doing my flower delivery at church, and going to Sunday School.. Still trying to take the girls and the dogs to the nursing homes so that we can all count our blessings. I don't have a lot of extra time, but I've learned that You make times for things you want to make time for. Its one of the most obnoxious things in the world when I hear "I'm just so busy.. I didn't have time".. You do. You make time for things that are important to you. You text people back that you care about talking to.. you go to dinner with those you want to hang out with.. You call and chat with those you want to see.. its not a time issue, its a decision issue. You decide whats important and then you make it a priority.. So with that said.. Figure out your priorities, because this year is flying by, so don't miss out on the Joy! 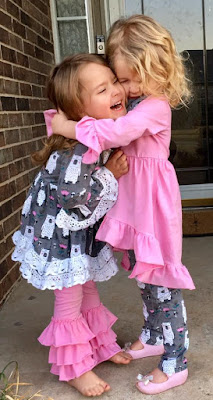