Hey Everyone! We've been busy at my house.. A few weeks ago we all piled into Dolly (my Sweet Mini Van) and went to Branson with Gigi & Pa.. 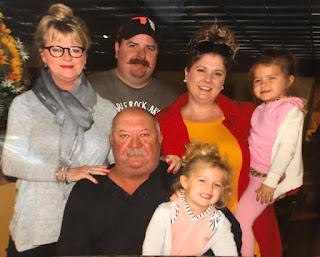 WE had an awesome time! Drive there was pretty and I'm not sure if I made us stop more to pee, or the girls.. but the beauty of having girls is I can blame it on them either way.. The girls watched Wizard of Oz and I read my book.. Overall not a bad drive with twin 4 year olds! 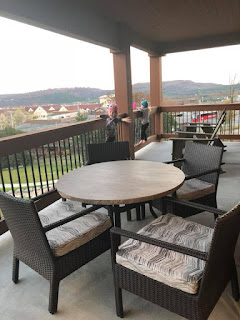 WE did a bunch of fun things.. But here are a few of the highlights.. First the place we stayed was incredible. IT was called The Lodges at Timber ridge.. From the Welk Resorts.. Holy Moly.. Awesome. 3 bedroom lodge/type place, 2 fireplaces, giant balcony, big Porcelain Tub.. I mean it was just beautiful and awesome..and we all loved it! The other great thing they had.. was tons of stuff to do, including a Christmas Elf that came to tell your kids bedtime stories, and gave them Cookies & milk! The girls loved that.. and even though the elf mispronounced "Rendezvous" (which made us laugh secretly at her because it was a rhyming story and she said "Ron-Dee-Voss).. she was still pretty awesome.. And the girls loved her. So that was amazing..

The Butterfly Garden was also great. We had bought a Groupon before we went, so it saved us a little money.. And we had a great time. Now, I realize in these pics the girls look like Snow White.. just welcoming Butterflies to land on and love them.. however, that was not entirely accurate.. Cross may or may not have swatted and ran from them at some point.. Londyn liked them pretty good and she was not bothered by them.. but Cross didn't like them swarming her (which they do b/c you are holding a nectar flower up to them) so there's that.. 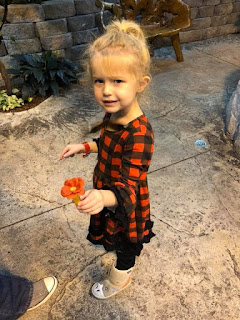 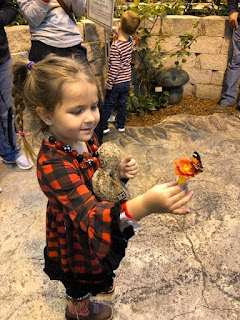 They showed a cool litter Monarch Butterfly Movie and the girls got some butterfly treasures that they liked.. Londyn is still talking about it..

Next Stop was the Drive-Thru Zoo.. (WHO KNEW).. The Drive Through Portion was not as awesome as the part where we got to get out. Cross got to see TWO huge live Owls.. which made her day.. Later that night when she was saying her Prayers she said "Thank you God for those owls".. lol.. We got to feed Kangaroos, Goats & Camels.. 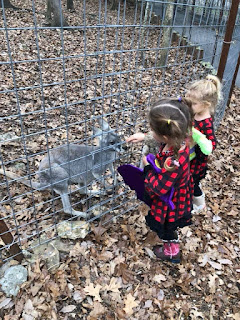 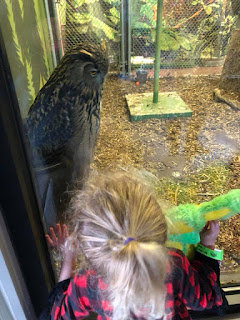 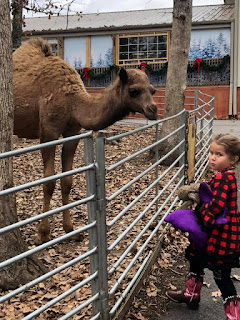 The weather was nice, so we just walked around and enjoyed the animals.. Next Stop was the singing Diner.. Mel's Hardluck Diner is in the Grand Village Shops, and the wait staff all sings songs while you eat.. Well one of the waitresses of course found Pa to sing too.. (this always happens to Steve.. they can sense fear and discomfort and go right for it) and the girls thought this was amazing. 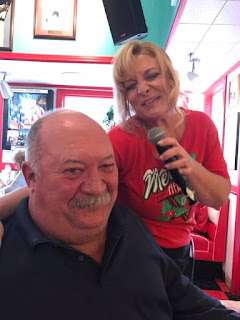 Then we had to go to the giant Chair and let the girls sit in it.. (because thats what everyone who visits Branson does) 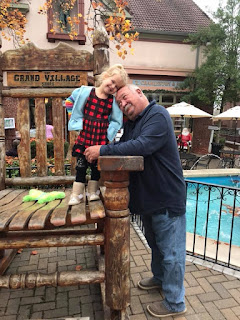 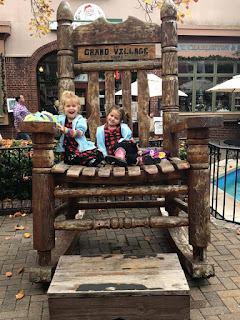 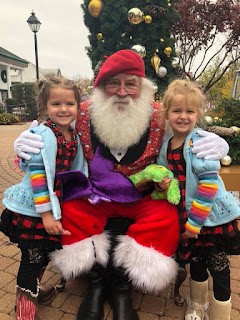 WE saved one of our evenings for the Dixie Stampede.. Let me tell you Jordan was less than enthusiasitc about this.. He thought it was going to be a Dolly Parton Concert.. which would have been fine with me.. but we all had so much fun! The show was awesome, food was awesome, service was aweosme and the girls loved it! They bring you out chicken, bread, potatoes.. all to eat without utensils.. which yes, does get messy, but it was really good food! They did a really moving Nativity Story and some really funny horse-riding racing fun! It was great! 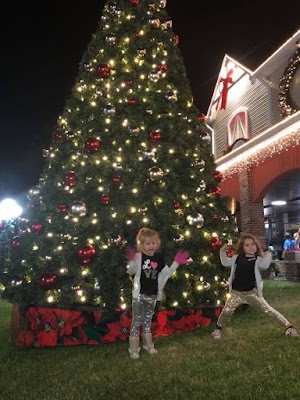 The girls also got to sleep in a big Queen bed together which they thought was awesome.. I tell you, they may fight.. and tattle.. and everything else, but their sweet little bond makes my heart happy! Did I mention that our Lodge also had an Indoor waterslide? YUP! So Saturday we spent swimming and going down the giant waterslide 223 times.. I saw WE.. I mean Pa and Jordan.. Mom and I supervised from the side-lines.. But the girls had a blast with their daddy and Pa catching them at the end of the slide!

Oh.. and did I also mention that we all dressed alike one day? Yeah.. how could I forget that magic!!! (Watch for matching PJ's at a later date) 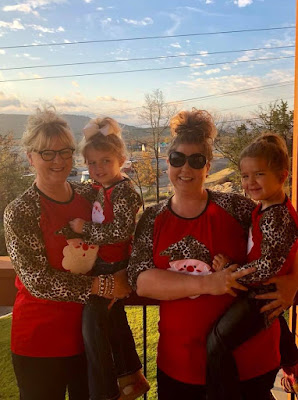 On Saturday we went down by Table Rock lake and looked at all the sites.. they had a Riverboat Party Cruise.. but it was docked because the wind was blowing really hard that day.. but it was pretty scenery.. the leaves were changing and everything looked pretty. We had pretty good weather the whole time we were down there.. 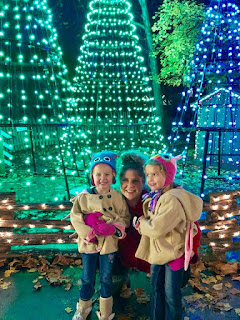 The only Schmowy, ruiney portion of the trip was Silver Dollar City.. A cold front moved on and it was COLD.. Now I realize this is probably user error on our part.. But I was calling it bad named that rhyme with "City" by the end of the evening.. WE didn't leave to go out there until around 3..and there had been a wreck on the main highway to get out there.. so traffic was backed up for about 1.5 hours.. in which I had to pee.. and I couldn't hold it.. so yeah, I had to pee on the side of the road.. #country And by the time we got to the front of the line for 'Preferred parking".. they were SOLD OUT and sent us on down to the commoner parking.. which was about 982 miles away.. in which we had to get on a BUS to get to the entrance.. so after we do that it was almost dark and we got in line to ride ONE ride.. That ALSO closed once we got to the front of the line #thisshouldhavebeenasign... But we powered on.. by then it was very dark.. lots of awesome lights, but we have no idea what we are doing, or where to go.. so we ended up staying for the Light-up Tree, and the Lighted Parade which was really good..  But overall.. we would do something different with that.. go earlier.. stay later.. etc.. We will be ready next time! 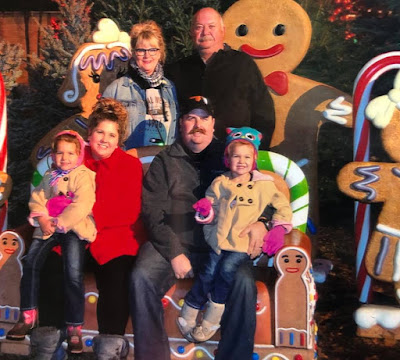 ON Sunday morning we got up to go have Breakfast at this great little Place called Grandma Ruth's Cinnamon Rolls or something like that.. and it was great.. and we even had a guy.. at EIGHT O CLOCK IN THE MORNING performing.. He sang "Somewhere over the Rainbow" and Londyn was an instant Fan! She jumped on stage with him to help him finish and he gave her a picture.. it made her day..

Now.. why is he singing at 8? No clue.. Was he on key? Not really.. But.. We appreciated the effort.. What we didn't appreciate was Crosslee spilling her 'coffee' all over the floor..then somehow flipping out of her chair and into the floor.. Because that was NOT ideal.. but #kids  So there you go.. It can't be perfect ALL the time.. But we did have a pretty perfect trip. The girls loved it, and we also had a much better time than we thought we were going to have! We will be ready to do it next year..

Now we have moved into the Christmas Season.. Hope you guys had an amazing Thanksgiving.. ours was EVENTFUL.. but I'll write about that next week.. b/c too much drama for one post.. see you then!