Tell me something good..

So.. I'm happy to have found another radio show to listen too.. When Kidd Kraddick died, I tried to give that show a go, but man, its pretty terrible without him, so I had to find something else.. Enter the Bobby Bones Show on 101.9 The Twister.. ITs out of Nashville, so not Local, but its pretty good.. Each day he has this feature called "Tell me something good" in which they share good news.. I like it.. I'm also pretty pumped about the new "Hank FM" radio station.. ITs classic country, and its actually GOOD Classic country! I heard me a little Tanya Tucker, and they play the Oak Ridge Boys, so I'm in!!

We had a great time at the farm last weekend.. Crosslee loves outside and Londyn loves the hot tub, so its a win-win! The weather has been so nice. I think I'm going to get out the girls Halloween outfits this weekend and see how that works.. They are going as little holstein cows. Sawyer has a matching costume with them. I'm thinking this could be a huge cuteness opportunity, so we'll see if they cooperate.

We are taking the girls to see MJ's dad & step mom this weekend. They offered to watch the girls for a few hours while we go to the movie, or shop around.. Not sure what we will do with this magical free time, but I'm thinking we will find something!! I want to see the movie "Rush".. with Chris Helmsworth.. the guy who played Thor.. MJ is not excited about this, which I find shocking, because its about cars that drive fast, which is something he is usually into big time. We may just go get Jordan some more work clothes.. For those who don't know, at the end of August MJ left his job at the FAA and went to work for Aubrey's new company, American Energy Partners. He LOVES It.. and being that the Goverment is on hold right now, its a huge blessing! I knew he would love it.. and he is doing awesome over there, but he has had to kick the dress code up a notch, so we need to get him some more dress clothes. 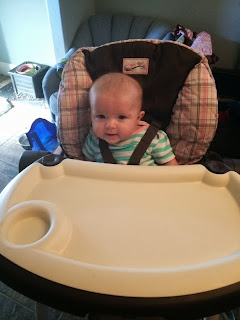 The girls had their shots on Tuesday. They are both doing awesome. Cross is almost 15 pounds now! They are 4 months old now, and L weighs 13.7. Remember in the womb, L was always bigger, so Cross is making up for lost time. They are both pretty fun right now. They laugh out loud..especially when my mom tickles them. Cross is very ticklish and she laughs all the time. Thankfully she is through with her rage issues for the most part. They took the shots pretty good.. Our Peditrician said it was time for Miss Cross to start eating cereal because she is not getting full at night.. So as a result I get up with her 3-5 times in the night and she wants a bottle.. So we may try that this weekend too.. I got them some high chairs yesterday and Cross likes it.. She likes to sit in there and play.

They are becoming more playful now. Lapoppins takes them outside in their exersaucer and bouncer to play and they love watching things outside. This fallish weather has been so nice. Tonight we are supposed to go to a Church Social.. and we'll see if the girls will cooperate. Its so hard for us to do things in the evening because they have a pretty good evening schedule.. If we get off that, we usually pay the price! 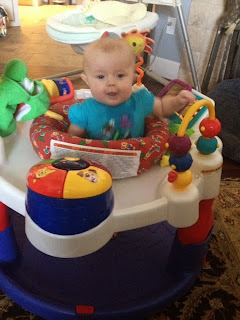 Pretty excited about Fall TV.. American Horror story starts this week.. The Coven.. Should be creepy and good.. Also been watching that new show "The Black List".. its very good.. and then Grey's finally came back on! I'll be honest, most of these are watched on DVR when we get a spare minute, but I do still love me some TV.

I've decided I'm going to start doing a Podcast.. Not sure exactly how its going to play out, but I'll update with details when it gets a little closer to happening. There's just too much stupid stuff that happens to me for me not to share it with you guys! More to come...